Here is a chart of what we estimate the share of likely parent voters (based on demographic characteristics) in school district 27J who have voted. In 2014 (when we lost by 120 votes) parents made up about 23% of the people who voted. If parents make up more than 26% of the electorate in this election, then we believe that 3C has a strong chance of passing. 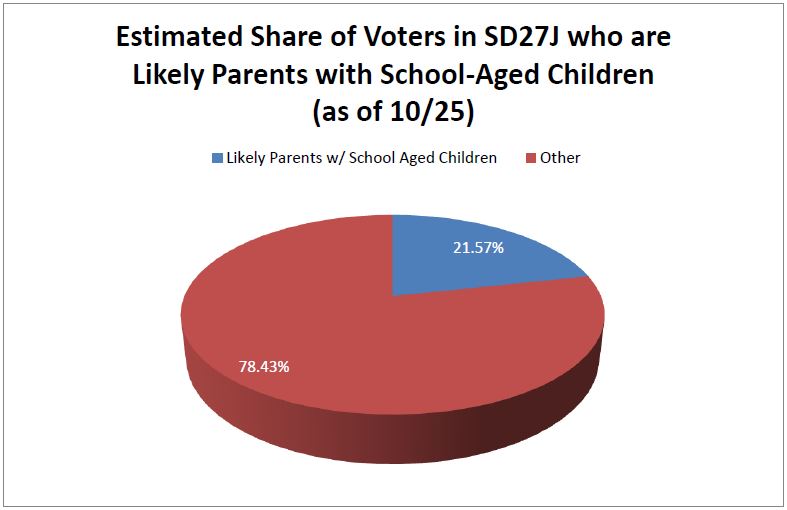 Right now, this percentage is at 21.57%, that's a problem we need your help fixing.

If we all do our jobs, this number will grow as we get closer to Election Day. If you want to see who's voted so far, click "read more" below to see an alphabetical list of people who have voted. While how you vote is completely private, whether you have voted is a matter of public record. Keep in mind that this is a list of everyone who has voted, not just parents.

Some people may have dropped off their ballot or placed it in the mail and it just hasn't been processed yet. But if you have friends and family who aren't on this list, might be a good idea to give them a little reminder.

You can find a list of ballot dropoff locations here. That is by far the fastest way to get your name on this list.

We will post the next update on Tuesday afternoon.

Here is the list of people who have voted who live in Adams County. Thank you for voting! Again, some people who have returned their ballots and the clerk hasn't had the chance to process them. So if you're name is not on the list and you think it should be, just leave a comment and let us know! Also, there are some people who reside in SD 27J but are outside the county, so they won't be on this list